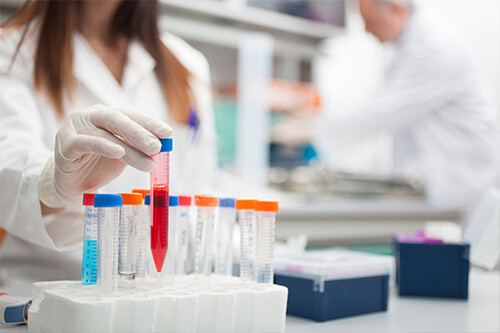 Antibody drug conjugates (ADCs) are formulated to combine the targeting ability of monoclonal antibodies and the cytotoxic effect of chemotherapy drugs. An ideal ADC consists of three parts:

Comparatively, traditional chemotherapy drugs are designed to destroy fast growing cells which are usually tumour cells; however, this often also harm healthy cells leading to adverse effects in the recipient.

An ADC comprises of potent antitumour drugs linked through stable labile chemical bonds to an antibody. The antibody targets and binds to specific antigen expressed by cancer cells and is internalized (i.e. endocytosis). Inside the tumour cell, the linker is degraded and the potent cytotoxic drugs are released to cause cell death. This high specificity of ADCs maximizes the tumour destroying ability and minimizes healthy tissue exposure to cytotoxic molecule leading to improved therapeutic index. The design of an ADC is no simple endeavor. The combination of the antibody, linkers and small molecule drugs must be thoughtfully selected with the desired cellular target and cancer indication in mind.

The ideal target antigen should be highly and consistently expressed throughout the tumour with limited to no expression by normal healthy cells. It should also not be shed to prevent the antibody drug conjugate from binding to its target during circulation. When binded to the antigen, the antibody should be internalized by receptor-mediated endocytosis with no changes to the ADC. After treatment with ADC, the antigen should not be downregulated by the tumour.

The ideal antibody should not cause any immunogenicity within the recipient. Advances in antibody technology has reduced the occurrence. Previous antibodies made from mice caused significant immunogenicity. In these reactions, patients receiving these type of antibody drug conjugates produced anti-mouse antibodies which reduced efficacy of the ADCs. The availability of fully humanised antibodies has helped to limit this complication. Currently, the most commonly used antibodies are the human IgG isotypes with emphasis on the IgG1. Since antibodies by itself can be cytotoxic by affecting receptors and altering cellular signals, the antibodies originating from ADCs should ideally be neutralized once expended or only affect cancerous cells.

The ideal linker should keep the ADC intact during circulation and before internalization into target tumour cells. Equally important, the linker should release the small molecule drug once the ADC is internalized.

Another important factor is the drug per antibody ratio. Attaching too many small molecule drug to the antibody can cause the ADC to be unstable, increase systemic toxicity and reduce half-life. Attaching too few drug can lower the efficacy of the ADC. The desired drug to antibody ratio is around 4.

Research has shown that the concentration of the cytotoxic drug in tumour cells is only 1-2% of the administered dose. This suggest that the small molecule drug selected to be part of the ADC should be extremely potent with high efficacy even at pico- or nanomolar concentration. The two most commonly used class of cytotoxic drugs in ADCs are microtubule inhibitors and DNA-damaging molecules.

Clinical Use of ADCs

Gemtuzumab ozoogamicin is indicated as monotherapy in patients over the age of 60 with acute myelogenous leukemia who cannot undergo cytotoxic chemotherapy. It consists of a humanised IgG4 mAb against CD33 which is a surface antigen present on 85-90% of AML cells. It is linked to a calicheamicin cytotoxin. Phase II trials show it can achieve 30% remissions.

T-DM1  is composed of the humanized IgG1 anti-HER-2 antibody trastuzumab linked to the maystansinoid DM1. A phase 3 study has shown that it has potential for the treatment of HER2-positive breast cancer resistant to therapy with trastuzumab and a taxane.